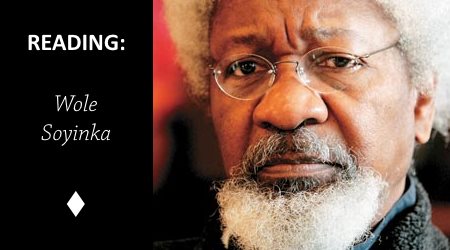 Nigerian Yorùbá playwright, novelist and poet Wole Soyinka (b. 1934) received the Nobel Prize in 1986 as the first representative of a ‘new English literature’ emerged in the former colonies. He is also a political activist who spent 22 months in prison basically for trying to avert the Nigerian civil war, in the sixties. I read a poem that contains many beautiful words:

Departures linger. Absences do not
Deplete the tavern. They hang over the haze
As exhalations from receded shores. Soon,
Night repossesses the silence, but till dawn
The notes hold sway, smoky
Epiphanies, possessive of the hours.

This music’s plaint forgives, redeems
The deafness of the world. Night turns
Homewards, sheathed in notes of solace, pleats
The broken silence of the heart.

We all know bar scenes and boy does Mr. Soyinka know how to describe ’em. Take the first lines with their colors smells shapes and how simple tobacco smoke becomes something extraordinary (actually, I think this would be a very good poem to use, paradoxically, in an anti-smoking campaign). The human bar scene is gradually replaced by marine metaphors, detained by Circe with her sultry notes (sultry: sexually exciting or oppressive heat and humidity?) At any rate, the mariners are her captives. Note that they were not lured by her voice but by notes (disseminated text). Derrida would have liked it for the priority it gives to the written over the spoken word.

Fish dancing for molluscs – someone is gettin’ drunk here. Lovers whisper, an androgynous being flaunts its eyelashes. The color has gone from blue to acquamarine to deep indigo (we expect black). Circe’s notes caress the night and the sleepwalking mellow band plays on. The spell, the igneous potions are still working.

The hazy bar doesn’t care about the people leaving (this third stanza is a hell of a poetic alternative for Hotel California’s departure trope or Neil Young’s crowded hazy bar). Exhalations from receded shores! The notes hold sway, you can never leave. A plaint is a cry of sorrow or grief; plaint forgiveness is not plain forgiveness nor faint forgiveness! The deafness of the world is redeemed, it’s okay the world out there, Circe’s notes offer solace to the souls in the tavern. When and if they finally leave, still drunk with this night sublime, their hearts are pleated (fabric folded back onto itself…) so the silence is restored. They can bear, another day, the injustices of the world (something Soyinka was very familiar with).

I think this is my favorite bar poem now. Do you know another one?

Reading: In The Small Hours by Wole Soyinka was originally published on Meandering home