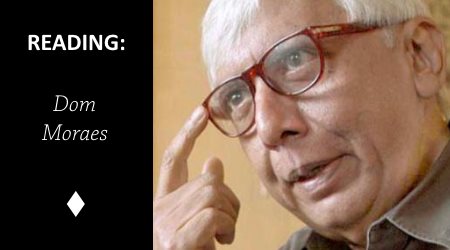 Dom Moraes (b. 1938-2004) was an Indian poet, widely regarded as foundational figure in Indian English literature. He was Catholic and struggled with alcoholism. I read Kanheri cave, I think it gives a good impression of the man’s writing:

Kanheri cave
Over these blunted, these tormented hills,
Hawks hail and wheel, toboggan down the sky.
It seems this green ambiguous landscape tilts
And teeters the perspective of the eye.
Only two centuries after Christ, this cliff
Was colonised by a mild antique race
Who left us, like a faded photograph,
Their memories that dry up in this place.

They left no ghosts. The rock alone endures.
The drains and cisterns work, but wrecked the stairs;
Blocks are fallen: sunlight cracks those floors,
And fidgets in a courtyard where a pair
Of giant Buddhas smile and wait their crash.
Then temples, audience-halls, a lonely tomb.
I touch its side. The stone’s worn smooth as flesh.
A stranger dangles peaceful in that womb.

Worm he will be, if born: blink in the sun.
I’ll crawl into his dark; perhaps he’ll climb
Beyond the trippers to the final stone
Plat of the hillock, there to grow in Time.
Dry pubic ferns prickle the bitter sand.
Hawks in a hot concentric ecstasy
Of flight and shriek Will wake his Vision. And
When the clouds lift, he’ll glimpse the miles-off sea.

“Deeply nestled among the tranquil surroundings of the Sanjay Gandhi National Park, Borivali in Mumbai, are more than 100 Buddhist caves popularly known as the Kanheri Caves“. Kanheri comes from the Sanskrit krishnagiri, meaning black mountain. Buddhists settled there in the 3th century AD, but I couldn’t find anything about the antique race. The imagery of the hawk and the teetered perspective.

Inside the caves, the poet takes stock of the rocks that still endure but are riddled with decay. The stone’s worn ‘smooth as flesh’, womb-like.

And the stranger is born and some complex transformations take place. He will be a worm, blinking in the sun, taking the place of the poet, who instead climbs to the final stone beyond the trippers (tourists, not consumers of psychedelics)?  In Time the cave system would be reduced to a hillock, overgrown with those pubic ferns. Then the hawks return and somehow seem to remember something: they are shrieking in ecstasy. The clouds lift, the sea becomes visible again. The antique race has left no ghosts, but there lies a Vision buried in these caves, a vision that can be woken.