So the next morning we walked around again, enjoyed the beautiful old town. We bought something in a supermarket, again, and I cooked a little brunch for John. He took his guitar and showed me how to play “Blowing in the Wind” by Bob Dylan with just three chords. As I fingered around on John’s twelve string guitar, a Turkish guy who looked pretty upset entered the room.

He told us somebody stole his money. It turned out to be the youngish guy that was glued to the computer the other day. He had lied about working in the hostel and that he could buy a ticket online, after Ibraim (John liked to call him Abraham) handed him 450 LT or 150 Euros. I turned on the computer, and found out our thief had forgotten to logout out of his gmail account. So I spent the next few hours finding out more about him then he’d probably know himself. I even found a copy of his passport, a bunch of Internet nicknames, correspondance that the hostel employee kindly translated – and I googled Sergej Krejmer or Sekre_Group, whose name I mention here because he has a criminal track record on the Internet (selling domain names without delivering them, among other things). Dear reader: beware of him!

After gathering all this information, we went to the police where Ibraim issued a formal statement, helped by a lot of officers and an interpreter. John started to call me Sherlock Holmes, and had me say “Elementary, Watson, elementary” to him. It felt kind of good.

We walked to the Old Town, where John pulled out his guitar and began to sing. I walked next to him carrying his guitar case. And so we walked, pretty proud of our investigation for Ibraim, which John gradually inflated to biblical proportions as we went on. The Beast had shown his face here, I learned, but we where on the winning side. “Hallelujah!” he said, and “Jesus loves you! Jesus mil jus!”. We ended up in a pizza restaurant where John played for twins that celebrated their 20th birthday. Once you start noticing, everything gets biblical connotations.

That night I went out with an Italian guy and two Australian girls, who were so unfortunate to have met John as well. One of their sisters happened to be lesbian, and in a tough discussion where they had to pull the words out of John, John proclaimed homosexuality a sin, got quite graphical about the wrong body entrances, and yes, said that the young woman would go to hell unless she’d be “delivered” of that sin. It made the Australian girls really angry, and they cursed John on our way to a pub. As I had expected, they suggested John to shove his guitar in the very body entrance whose limited functionality he had pointed out earlier.

We went to a dark pub and had a beer. As we found a few big bald guys in front of it, telling things like “we hate people, we are full of hatred” to the Australian girls, who opted to leave soon after that.

Back in the hostel there was a visitor. The criminal was back! He was so stupid to show up again, asking for a place to stay. We sent him away, after I told him about all I knew about him. You should have seen his face, as I summed up his nicknames, his exact age, his victims, his friends, and his passport issue date. It was a delight (though I don’t see it as an act of goodness. It was a pretty mean thing to do as well. Alas, the criminal gave me an excuse to be mean and feel good about it). After a while, the Italian guy and Ibraim came back and we decided to go actually catch him. We went to the station, where we find him. We confronted him with his theft and requested the money back. Sergej K. shrugged and told me in German he was broke. We all had enough and I really didn’t believe him. So we called the police, who came after some 20 minutes, searched him, and took him in.

At half past five, I lay my head down, with Tom Waits humming “Sea of Love” playing piano from my mobile.

The sunset was really wonderful. 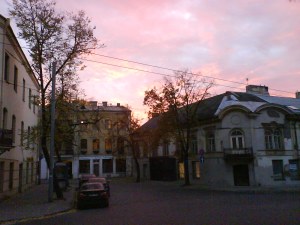